Violets are Blue by James Patterson

I never thought James Patterson would go the vampire route. I was wrong. Now, that being said, they aren’t REAL vampires. They are folks who call themselves vampires and drink blood. But nonetheless…. Vampires.

In the last book, Roses Are Red, we discover who the Mastermind is, but he isn’t found out by Alex Cross yet. He makes a reappearance in this novel and wreaks more havoc on Cross.

While trying to solve the mysterious vampire killers’ spree that is sweeping across the United States, Cross also has to deal with tauntings from the Mastermind and has to either push his worry aside or act to try to find out who this mad man is.

It was a thrilling read with a lot of twists and turns, and it was hard to put down.

I think the biggest twist was that there was no epilogue at the end! I don’t think I have read a Patterson book without one. At least not an Alex Cross or Womens Murder Club book. I was shocked when it just ended without one.

5/5 not a dull moment, and very easy to get through. 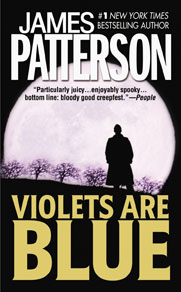 I am really glad Jamilla survived. I hope her and Alex can actually get closer and maybe have a relationship.

I am also glad that the Mastermind has been caught, but I have a feeling he will escape from prison.