‘A’ is for Alibi by Sue Grafton

PI Kinsey Millhone 32, in a pretty California town, gets her first case. Laurence Fife was a slick divorce lawyer and slippery ladies' man until someone killed him. Released from jail after 8 years, his wife Nikki wants the truth. But the trail is cold, and at the end is a chilling twist - a second eight-year-old murder and a brand new corpse.

By reading this book, it looks like this series could be everything that I look for in a long series.
First off, we have Kinsey Millhone as the protagonist. It is a joy to read a book through her POV. She is a badass and she has a good sense of humor as well. I found myself giggling a few times while reading because of her thoughts. It gives nice comic relief to the harsh cases that she has to investigate.

Second, we have the flow of the book. It was really easy to get into and it flowed together nicely making for a very easy and entertaining read. I didn’t have to strain my brain to see how the pieces of the book fit together. It is very straight forward.

That said, it is a mystery series, so there is still some guesswork on the part of the reader. I was trying to figure out who was guilty the whole time I was reading. My guess would change every few chapters or so until the reveal at the end. I can say that I guessed the twist, but I was not confident in my guess until it was revealed and I enjoyed that it kept me guessing.

Next, the writing style. Like I mentioned before, it is a very easy read because it sucks you in and makes you not want to stop reading. Grafton doesn’t spend time on useless details. She tells you what you need to know and that’s it. I loved that. I didn’t feel that any point of this novel dragged on longer than it needed to.

The story in ‘A’ is For Alibi was also just interesting in general. It wasn’t one of those books where the characters were the only aspects carrying me to finish the book. The story itself was good.

Now, this is only the first book in the series. But I cannot wait to finish the rest of them!

Shout out to Beth for the series rec.

Memorable Quotes:
“I had never believed she was guilty myself but I couldn’t remember what made me so sure. She seemed passionless and I couldn’t imagine her caring enough about anything to kill.”

“Henry trades bread and other baked goods to a nearby restaurant for his meals and he has also, of late, become quite crafty about clipping coupons, declaring that on a good day he can buy $50.00 worth of groceries for $6.98. Somehow these shopping expeditions seem to net him pairs of panty hose which he gives to me. I am halfway in love with Henry Pitts.” 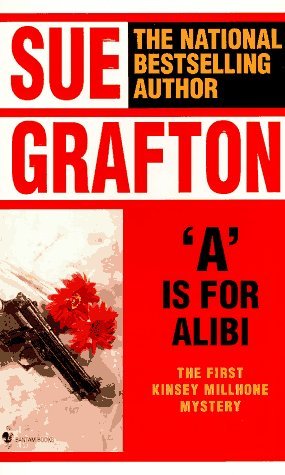