‘H’ is For Homicide by Sue Grafton

After a three-week-long investigation, Kinsey couldn't wait to get home. What she needed most was a few quiet days by herself--but two things happened to change all her plans.

First, she ran into a murder case. Then Kinsey met Bibianna Diaz, and before the night was over they were sharing a prison cell..

This book was. . . different. I didn’t feel like I was reading a Kinsey book because she was undercover for the majority of it. She wasn’t leading her usual bad-ass private investigator life. She was undercover in a life of crime.

It was strange to read, and I didn’t like it. But even though I didn’t like that aspect, I liked the book. The book hooked me and I kept turning the page. I couldn’t put the book down. Because she was around the people she was investigation so much, they became humanized. Usually you can just see them as the bad guy, but there was a human side to them in this book which added more depth.

I was hoping that Kinsey would be able to bust out more of her badass self, but aside from playing her undercover role well, we didn’t get to see it as much.

I am so conflicted on it, but I can say that I did enjoy it. The characters were very well developed and the story was different.

I am excited to read the next book, though. I am hoping it is more of a normal book for her.

Memorable Quotes: “Life was good. I was female, single, with money in my pocket and enough gas to get home. I had nobody to answer to and no ties to speak of. I was healthy, physically fit, filled with energy.”

“I tried to look like an especially law-abiding citizen instead of the free-lance private investigator with a tendency to fib.” 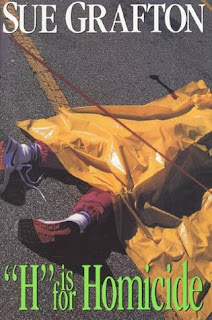