The Other Typist by Suzanne Rindell

Confessions are Rose Baker’s job. A typist for the New York City Police Department, she sits in judgment like a high priestess. Criminals come before her to admit their transgressions, and, with a few strokes of the keys before her, she seals their fate. But while she may hear about shootings, knifings, and crimes of passion, as soon as she leaves the room, she reverts to a dignified and proper lady. Until Odalie joins the typing pool.

As Rose quickly falls under the stylish, coquettish Odalie’s spell, she is lured into a sparkling underworld of speakeasies and jazz. And what starts as simple fascination turns into an obsession from which she may never recover.

This book is so frustrating, yet so intriguing and mysterious. It is hard to keep in mind that this book takes place in the 20’s. The main character, Rose, speaks a lot about femininity and what a woman is supposed to be. It is so wildly different from the culture we live in now.

Part of me wants to smack her at times. Other parts of me just feel bad for her.

Then you think about her fascination with Odalie, and it is all very mysterious. Half way through the book and you still don’t really understand how deep her fascination goes.

It is also hard to figure out whether Rose is into women platonically or whether she is into them in a romantic sense.

This book follows the two of them and then it reaches a peak at the end. All I can say about that is, I am confused.

I was still confused after I read the last line of the book. Yes, it threw a twist at us, but I am not really sure what they twist was.

Maybe I am just being dumb with this one.

I did like the book overall, Rose was a very frustrating character to read about, but it was mysterious and kept me hanging on.

Memorable Quotes: “A good typist knows her place. She is simply happy, as a woman, to be paid a reasonable income.”

“I am quite skilled at watching people, and I believe this habit has given me something of a true education in the world – perhaps in more ways than one.”

“I wasn’t as sure as Odalie seemed to be about the prospect of my falling in love with what promised to be a group of derelicts posing as intellectuals, but I was becoming increasingly sure I was about to allow myself to be charmed by Odalie herself.”

“There is something darkly thrilling about standing on the balcony of a very tall building and looking over the edge with the silent knowledge that is in one’s own power to jump.”

“You see, doubt is magnificently difficult pest of which to try to rid oneself, and is worse than any other kind of infestation. It can creep in quietly and through the tiniest of cracks, and once inside, it is almost impossible to ever completely remove.” 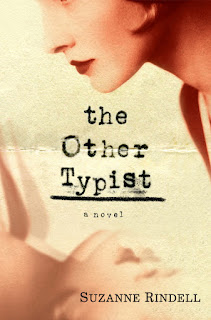