I Know This Much Is True by Wally Lamb

On the afternoon of October 12, 1990, my twin brother, Thomas, entered the Three Rivers, Connecticut, public library, retreated to one of the rear study carrels, and prayed to God the sacrifice he was about to commit would be deemed acceptable. . . .

One of the most acclaimed novels of our time, Wally Lamb's I Know This Much Is True is a story of alienation and connection, devastation and renewal, at once joyous, heartbreaking, poignant, mystical, and powerfully, profoundly human.

Woah. This book is heavy. It touches on so many rough topics. Let’s take a quick look at some of those:
Mental Disorders
Mental and Physical Abuse
Incest
Homophobia
Suicide
Rape
Death

And that isn’t even all of them. This is one of the most complete novels that I have read in a long time, and it better be since it was almost 900 pages long. I won’t lie -- the length was intimidating. It made me put off reading this book for a few months, but once I actually opened it up to give it a shot, I was hooked.

We can start with Dominick, the main protagonist. The POV character of the book. Straight up, Dominick is an asshole. So many times throughout the duration of the book, I just wanted to smack him for how he talked to people and how he treated them or thought about them. But the more you read, the more his personality starts to make sense. It doesn’t excuse his behavior, but he makes sense and you can begin to feel bad for him and relate to him at times. Dom didn’t have an easy life by any means. By the end you just want things to be okay for him.

Thomas was just a tragic character in this story. From the very first page until the very last. The whole time, I wanted to just grab Thomas and hug him and never let go. I wanted to protect him like Dominick tried to.  Getting the short end of the stick in every situation. Being Dom’s twin, he was always the black sheep brother. The one that everyone liked less, and then he had to have life deal him another blow with schizophrenia. Thomas’s life just wasn’t fair. From the way he was treated as a kid by his own family and the other kids to the way he was handled by the folks at Hatch, the end of Thomas’s story came as no surprise.

Ray could be considered one of the antagonists in the novel, aside from life itself. Ray was a piece of work, and chapters that included him in the early years were so painful to read at times, but the book wouldn’t have been complete without him. Seeing bits and pieces of his softer side really humanized him, but just like Dom, I couldn’t let go of all of the bad things he had done.

Dom and Thomas’s Mother was an interesting character because the only time we meet her is in flashbacks. Her role in the story contributed so much to how both Dominick and Thomas grew up. If you are into ‘Nature vs. Nurture’ there is an interesting argument to be had about this family. A set of twins that are completely different, yet they are raised by the same parents. The parents treat the boys different, but does turn them into who they became? I would like to hear other opinions on this topic.

Domenico, the grandfather. The mysterious man. We only hear about him until Dominick gets his memoir back in a weird twist of fate. I will admit, most of the chapters that included his memoir dragged on for me. I skipped half of one entirely because I was bored. Some of them were really intense and attention grabbing though. Reading through his writing, you can see where Dominick gets his temperament and part of his personality. Domenico was 1000x worse though. He also came from a different time and from a different situation. Just like Ray, some of his story was so hard to read. He was a terrible man, but he thought so highly of himself.

Shaeffer was. . . and interesting part of the story. I really liked her character but I also couldn’t exactly figure her out. I feel like there was a deeper side to her that we never really got to explore. I would have liked to know more about her, but this book was already super long.

Dr. Patel is a fantastic character in this story. Dominick needed her more than anything because she wouldn’t put up with his nonsense. She wouldn’t let him lie to himself anymore or hide from things he needed to face. I enjoyed her personality and almost wish there was a book series with her as the protagonist.

Dessa – This book wouldn’t have been anything without Dessa’s character. She isn’t actually present for most of the novel, but a lot of the book revolves around the relationship that Dominick and Dessa had. Her character forced his character to be deeper and more developed in a lot of ways.

Leo the classic jokester best friend with a soft side. He is an interesting guy and helped Dominick get through a lot of things in life whether it was from being a supportive friend or by being a jerk and it just happened to work out.

Ralph is like that background character that you see in movies that turns out to play a major role in the story. It seemed that Ralph was around for almost every major event that Dominick had to face. Towards the end you can figure out why that seems to be.

I think everyone needs to read this book to discover a little more about themselves. It will challenge you, it will make you cringe, laugh, cry, scream, and want to tear the book in half. But it will also keep you reading until the very end, and that is what is so beautiful about it. It is an extremely well written novel, and I feel like I am better for having read it.

5/5 Stars despite the length and a few slow parts.

Memorable Quotes: “I couldn’t do it. Poured that little cascade of capsules down the sink instead of down my throat. Turned the water on and washed away my big suicide.”

“Our being human made us tragic and comic both, she had said: the gods both laughed and wept.” 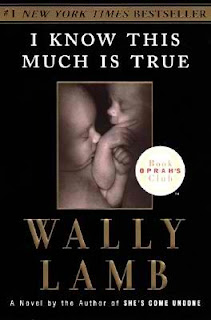 Click To Purchase!
Posted by Courtney at 1:49 AM No comments:


In this new novella from USA Today bestselling author Robert Swartwood, available exclusively as an eBook, a young Holly Lin comes face to face with danger for the first time.

Oahu, Hawaii. Paradise to some, but to seventeen-year-old Holly Lin it's a place she'll never forget. A place where she's kidnapped by masked men. A place where she must find the strength to survive. A place that will take her one step closer to her first kill.

So, First Kill is August’s Book of the Month in a group I am a part of on Goodreads. Being a novella, I figured this was a good one to read to get back to being involved in that community.

This is my first Robert Swartwood book, and I think I am intrigued to read more. I have gathered that he usually writes full-length novels, so my next experience with his writing should be interesting.
First Kill is a bit of an unrealistic book. A 17-year-old taking on a bunch of people at once typically wouldn’t happen in real life. That said, the action kept the pace of the book fast, and Holly was an interesting enough character to keep reading.

There are more books with her as the protagonist, so maybe I will finish her series.

If you like action books or thrillers, I think you will like this book. It is packed full of action, and the suspense keeps you guessing.

It was a positive first experience with Robert Swartwood, and I look forward to the next book. 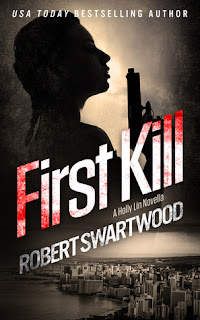