Top cop, devoted sister, and now Inmate 3329: even prison bars won't stop Harriet Blue from seeking justice for the murder of her brother.

Prison is a dangerous place for a former cop -- as Harriet Blue is learning on a daily basis.

So, following a fight for her life and a prison-wide lockdown, the last person she wants to see is Deputy Police Commissioner Joe Woods. The man who put her inside.

But Woods is not there to gloat. His daughter Tonya and her two-year-old child have gone missing.

He's ready to offer Harriet a deal: find his family to buy her freedom . . .

This book was intense. It’s no secret that I’m a fan of the Harriet Blue series, but ‘Hush’ absolutely sucked me right in.

There were so many different things going on. It all started out with Harry being in jail. We get an insight into how her stay has been so far – violent and less than ideal. When Deputy Police Commissioner Joe Woods’s daughter and granddaughter go missing, he’s desperate and knows he needs the unconventional style of Harriet and her crew to find them – hopefully alive.

Then, there's a murder in the prison. The doctor that Harry has become friends with is murdered and her cellmate is blamed. Harry knows in her gut that the case isn't that cut and dry. She takes the deal from Joe Woods to investigate his family's disappearance as long as she can also try to solve the murder of Doctor Goldman from the outside.

Hush endears the readers even more to the dynamic trio that is Harriet Blue, Ed Whittaker, and Tox Barnes. They make a great team and they’re fun to read about.

This whole series takes you on an emotional journey, but it’s also just plain fun to read. The characters you’re supposed to like are very likable and you root for them the whole time.

If you want some books that are quick reads, pick up this series! 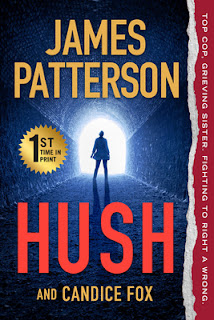