A deadly black widow has eliminated three husbands and counting. But Nameless knows her one weakness. To bring truth and its consequences to her crimes, the vigilante must spin a web of his own in part three of the Nameless series.

Lucia—current last name, Rickenbah—has made a fortune by marrying rich men who tend to drop dead. But the superstitious blonde believes in more than money and murder. Nameless’s job is to scare a confession out of Lucia, and as the psychological warfare escalates, even he may be in for a shock.

The third book in the Nameless series sees the first female antagonist. She sure is something. She will take down anyone in search of endless wealth. But, it catches up to her.

Nameless and the crew use their most creative method yet for torturing their bad guy. I can’t even begin to spoil it. It’s as crazy as the lady, herself, is. You just have to give it a read.

5/5 stars if for nothing more than the insanity that ensued.

Memorable Quote: “However, he is a tool of the program, a status for which he is sure that he volunteered before amnesia was imposed on him. A hammer should not argue with the carpenter who wields it.” 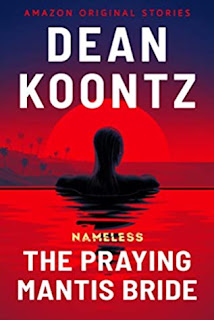