IT by Stephen King

The story follows the exploits of seven children as they are terrorized by an eponymous being, which exploits the fears and phobias of its victims in order to disguise itself while hunting its prey. "It" primarily appears in the form of a clown in order to attract its preferred prey of young children. The novel is told through narratives alternating between two time periods, and is largely told in the third-person omniscient mode. It deals with themes which would eventually become King staples: the power of memory, childhood trauma, and the ugliness lurking behind a façade of traditional small-town values.

This was my first experience reading a King novel, and it was an interesting experience for sure.
I have never seen the movie, and I didn’t even really know what the book was about aside from the clown that wreaks all sorts of havoc.

The first thing I really noticed was how long the chapters are. I don’t know if this is just King’s style, or if it is just this book, but it made it really difficult to read large chunks of the book at a time. It took me almost a full year to finish it.

The story was obviously super intriguing. The parts where Pennywise shows up were the most entertaining by far, he was so creepy and annoying.  I really wish that the story revolved more around him and his antics, and I wish that the whole thing was just about a creepy/annoying clown terrorizing these children.

That is why I wasn’t a huge fan of the ending. It starts getting a little to weird when it starts revealing what is really going on below Derry. Even then, it is never really resolved for me. It is sort of along the lines of fear is only in your head, and when you enable it, it becomes real.

I did enjoy reading the book, but I enjoyed finishing it even more. The main gang of kids were great characters, and of course Mr. Pennywise. The supporting cast didn’t really do anything for me.

Final thoughts:
I wish the sections/chapters would have been shorter. That is my biggest complaint.

It is more enjoyable to read this when it is raining.

My favorite character was Ben.

3/5 stars. Good book, just such a chore to finish!

Memorable Quotes: “TV monsters and movie monsters and comic book monsters were not real. Not until you went to bed and couldn’t sleep; not until the last four pieces of candy, wrapped in tissues and kept under your pillow against the evils of the night, were gobbled up; not until the bed itself turned into a lake of rancid dreams and the wind screamed outside and you were afraid to look at the window because there might be a face there, an ancient grinning face that had not rotted but simply dried like an old leaf, its eyes sunken diamonds pushed deep into dark sockets; not until you saw one ripped and clawlike hand holding out a bunch of balloons”

“Scars can’t come back. They either are or they aren’t” 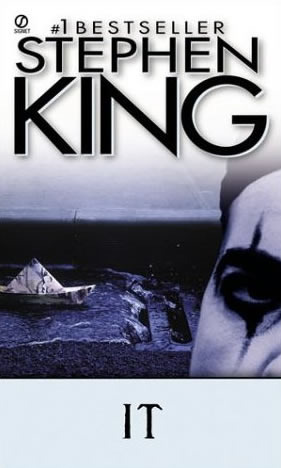