‘G’ is For Gumshoe by Sue Grafton

G IS FOR GAME…

When Irene Gersh asks PI Kinsey Millhone to locate her elderly mother Agnes, whom she hasn't heard from in six months, it's not exactly the kind of case Kinsey jumps for. But a girl's gotta pay her bills, and this should be easy money—or so she thinks. Kinsey finds Agnes in a hospital. Aside from her occasional memory lapses, the octogenarian seems fine. And frightened.

Kinsey doesn't know what to make of Agnes's vague fears and bizarre ramblings, but she's got her own worries. It seems Tyrone Patty, a criminal she helped put behind bars, is looking to make a hit. First, Kinsey's car is run off the road, and then days later, she's almost gunned down, setting in motion a harrowing cat and mouse game…

G IS FOR GUMSHOE

So Kinsey decides to hire a bodyguard. With PI Robert Dietz watching her 24/7, Kinsey is feeling on edge…especially with their growing sexual tension. Then, Agnes dies of an apparent homicide, Kinsey realizes the old lady wasn't so senile after all—and maybe she was trying to tell her something? Now Kinsey's determined to learn the truth…even if it kills her.

I am glad that this book followed the last one. The last book didn’t feel like a Kinsey novel, but ‘G’ had Kinsey written all over it. It was refreshing to get back into a familiar setting and pace of story.
There is a lot of action in this book, and her life is in danger once again.

Dietz is a character that gets a new and bigger role in this novel, which I was happy about. I liked him as soon as he walked into this book, and I liked him more and more as the novel went along.
I hope that he makes an appearance in later novels.

The storyline of ‘G’ grabbed my attention and held it a lot better than ‘F’ did. It kept me guessing and made me not want to put the book down. It seemed like there was danger around every corner.

Memorable Quotes: "If I were asked to rate my looks on a scale of one to ten, I wouldn't. I have to say, however, that I seldom wear makeup, so whatever I look like first thing in the morning at least remains consistent as the day wears on."

"When you're presented with bad news, there's always this lag time, the brain simply unable to assimilate the facts."

"A threat on your life is a curious thing. It seems, at the same time, both abstract and absurd." 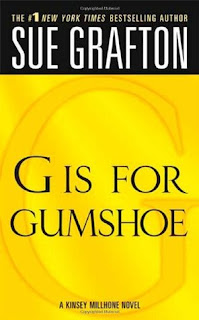