“I very much need to be dead.”
These are the chilling words left behind by a man who had everything to live for—but took his own life. In the aftermath, his widow, Jane Hawk, does what all her grief, fear, and fury demand: find the truth, no matter what.

People of talent and accomplishment, people admired and happy and sound of mind, have been committing suicide in surprising numbers. When Jane seeks to learn why, she becomes the most-wanted fugitive in America. Her powerful enemies are protecting a secret so important—so terrifying—that they will exterminate anyone in their way.

But all their power and viciousness may not be enough to stop a woman as clever as they are cold-blooded, as relentless as they are ruthless—and who is driven by a righteous rage they can never comprehend. Because it is born of love.

The synopsis on this book was way too intriguing for me to pass it up. Plus, I just enjoy Dean Koontz novels. So, no brainer here.

This was one of those novels that I picked up a year ago, read a few chapters, then got distracted by life and put it down for way too long. So, when I picked it back up, I started from the beginning. This time, it sunk its teeth into me and wouldn’t let go.

It's kind of funny. I bought The Silent Corner and The Silent Patient in the same Amazon order. Then I read them back-to-back a year later. It wasn't even on purpose. Just a funny coincidence I suppose.

The Silent Corner a truly compelling story about mind control, while there may be a bit of a sci-fi edge to it; I shudder to think that anything like this could become a reality. But I wouldn’t deny the possibility. I almost felt like I had been injected with mind-control serum because I couldn’t put this book down. Whenever I wasn’t reading it, I just wanted to get back to it.

I’m a sucker for a badass female protagonist. So, this checks off all the boxes for me. I was thrilled to learn that it’s the first book in a series and not a stand-a-lone. It’s pretty long which could seem daunting, but it flies by.

The ending of this book was absolutely unbearable, because . . . hear me out:

It was ramping up very quickly. I was able to calm myself down by reassuring myself that there are more books in this series, so obviously Jane Hawk doesn’t die in the end (of this one, at least). But, as it went along, I got attached to other characters, and I had no idea how this was going to play out.

Then there was the final scene between Jane and Nathan and it made my cold heart so very sad.

I read A LOT of thrillers and detective novels. They’re the majority of the books that I read. Bad things happen in these books. But, I’m one of those people that doesn’t want anything bad to happen to the protagonists. And, when things are going poorly, I get upset. I know . . . I know . . . it doesn’t make much sense. But here we are. I was squirming while finishing this one. But I was pleased by how it concluded.

Jane Hawk is a badass. I can’t wait to read the next one. 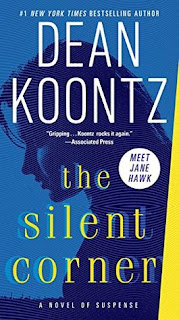