The Face of Deception (Eve Duncan #1) by Iris Johansen

An unidentified skull, a trail of shocking secrets, and a woman whose talented hands could reveal the terrifying truth--#1 New York Times bestselling author Iris Johansen blends these elements into a compelling novel of suspense, and introduces her most popular character ever: forensic sculptor Eve Duncan.

After her beloved daughter vanishes, Eve Duncan survives by immersing herself in her work. The best in her elite field at rebuilding faces from fragments of skull bones, she helps to put a name to a face, to identify missing children. It is Eve's way of coming to terms with her personal nightmare. But more terror lies ahead when she accepts a job from billionaire John Logan. Beneath Eve's gifted hands, a face begins to emerge from the skull he has given her to reconstruct--a face that no one was ever meant to see. Now Eve is trapped in a web of murder and deceit as powerful enemies rush to cover up the truth, determined that their secrets go to the grave--even if Eve gets buried with them.

I love jumping into a brand new series. You get to meet new characters and, if you like the first book, you can settle in for a fun ride.

This book took most of the things I enjoy in a good crime novel and made it fun. I don’t know if the whole series will just be a fun read, but the first book was. I feel like it doesn’t take itself too seriously, so readers shouldn’t either.

There’s a strong female protagonist, a crime suspense element, and the story wraps up at the end of the novel.

I’m not a huge fan of cliffhangers in books, unless it’s done very well. If there’s going to be one, there has to be some resolution to the story with a hint that there will be a storyline that flows into the next book as well. I prefer when books in a series could survive as a standalone book if you wanted to read them that way. The first book in the Eve Duncan series provided that.

I’ve read many books about detectives and private investigators. None of the book I’ve read have had a Forensic Sculptor as a protagonist. I didn’t even know that was a career. So, that was very interesting. I can only hope that Iris Johansen has done research on the career so we get more insight into the process and what goes into it. That’s still left to be seen.

The Face of Deception was a fun and quick read. Eve seems like she could be an interesting protagonist to follow. I’ll definitely be picking up book #2! 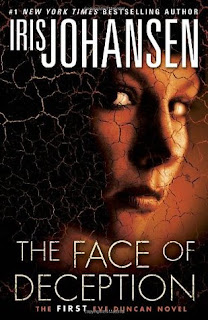