KYLA HAS BEEN SLATED - her memory erased, her personality wiped blank. This is the government's way of dealing with teen terrorists: give them a fresh start as a new person. They teach Kyla how to walk and talk again, give her a new identity and a new family, and tell her to be grateful for this second chance.

It's also her last chance, and to ensure that she plays by their rules, Kyla is fitted with a Levo, a bracelet that monitors her mood and will stun - or even kill - her if her levels of anger or violence rise too high.

As she adjusts to her new life, Kyla can see she is different from the other Slateds. She asks too many questions and is plagued by nightmares that feel like memories - even though she shouldn't have memories. Who is she, really? Has her Slating gone wrong? And if only criminals are Slated, why are innocent people disappearing? Torn between the need to understand more and her instinct for self-peservation, Kyla knows a dangerous game is being played with her life, and she's determined not to let anyone see her make the wrong move...

Slated presents a really intriguing, yet exceptionally terrifying concept. The government outfits kids they consider terrorists with devices called Levos. If their mood sways in a way that is considered unacceptable, it can shock them or potentially kill them.

This book follows the main character, Kyla, as she attempts to adjust to the slated life while still having too many questions for her own good, according to those in charge. She wants to remember who she is, or was. But, another rule is that their memory must be wiped and they aren't supposed to remember anything.

Eventually, things get a bit out of hand. Is the slated life really worthwhile?

I really enjoyed the story because it was new and interesting. I found the characters intriguing as well which made me want to know what happens to them. 'Slated' is an easy book to get into and get lost in for a little bit.

It's a super easy read. So if you're looking to escape to a weird, different version of the world we live in - give it a shot. 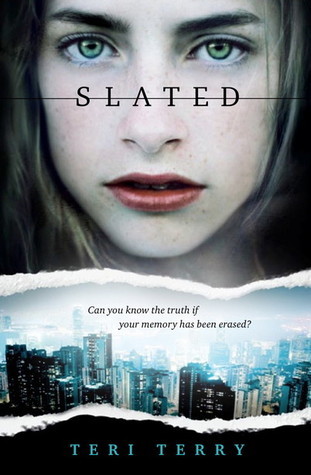