No one can separate defense attorney Andy Carpenter from his golden retriever, Tara, who stands loyally beside him through every investigation, no matter how dangerous or puzzling-and he is about to be confronted with one of his most difficult cases yet.

When a cop's body is found burned and decapitated, the last thing Andy expects is for a stranger to waltz into his office and confess to the crime. For the wisecracking millionaire attorney suffering from "lawyer's block," the case looks like a no-brainer, that is until the cops pick up another suspect: Andy's lead P.I., Laurie Collins, who happens to be the love of his life. Soon Laurie's case is looking bleak and Andy is becoming increasingly desperate. All he had wanted was a case to sink his teeth into. Now he gets one that's a kick in the head . . . and the heart.

First of all, one of the main characters is a golden retriever. I automatically love it.

To add another layer, said attorney is faced with the task of getting his girlfriend found not-guilty of a brutal murder.

'First Degree provided an interesting story with fun characters PLUS a golden retriever.

I haven't decided if I want to give the rest of the series a shot or just appreciate this book for what it is alone. I didn't realize it was the second book in a series when I started it, oops. 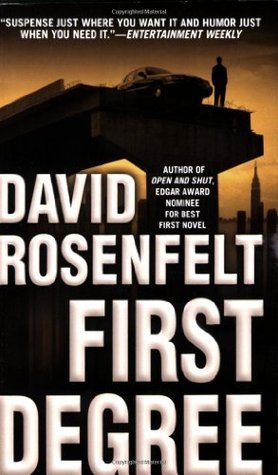 Posted by Courtney at 3:20 PM No comments: