Behind Closed Doors by Elizabeth Haynes

Ten years ago, fifteen-year-old Scarlett Rainsford vanished while on a family holiday in Greece. Was she abducted, or did she run away? Lou Smith worked the case as a police constable, and failing to find Scarlett has been one of the biggest regrets of her career. No one is more shocked than Lou to learn that Scarlett has unexpectedly been found during a Special Branch raid of a brothel in Briarstone.

Lou and her Major Crimes team are already stretched working two troubling cases: nineteen-year-old Ian Palmer was found badly beaten; soon after, bar owner Carl McVey was found half-buried in the woods, his Rolex and money gone. While Lou tries to establish the links between the two cases, DS Sam Hollands works with Special Branch to question Scarlett. What happened to her? Where has she been until now? And why is her family—with the exception of her emotionally fragile younger sister, Juliette—less than enthusiastic about her return?

When another brutal assault and homicide are linked to the McVey murder, Lou's cases collide, and the clues all point in one terrifying direction. As the pressure and the danger mount, it becomes clear that the silent, secretive Scarlett holds the key to everything.

Man, this book seemed to never end. It wasn’t a bad book, but it felt like the more I read – the longer it got.

This was more of a story-driven novel than a character driven novel. I didn’t really care much about any specific character, but they all got sort of interesting as the book went on.

The telling of the book was interesting. It switched between present day and flashbacks. If it is hard for you to keep up with things like that, then maybe skip this one, but I found it easy to follow along with.

This was book #2 with Louisa Smith in it. Admittedly, I did not know that when I started the book, so I haven’t read the first one. But she didn’t seem to be a big part of the book or the story. I would have liked it a bit more if she had played a larger role. She almost seemed pointless in this one.

The story was interesting, but there wasn’t really much of a twist. I expected it to take more of a Gone Girl turn, and it never did. The mystery of it kept me interested until the end, but I expected there to be more twists and turns. It was really odd to me that there wasn’t.

Overall, I did enjoy the book. It is very long, though, and wasn’t one of my favorites. 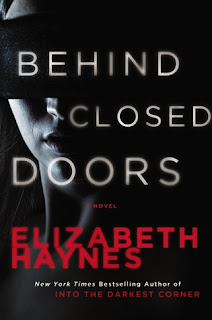