‘F’ is for Fugitive by Sue Grafton

When Kinsey Millhone first arrives in Floral Beach, California, it’s hard for her to picture the idyllic coastal town as the setting of a brutal murder. Seventeen years ago, the body of Jean Timberlake—a troubled teen who had a reputation with the boys—was found on the beach. Her boyfriend Bailey Fowler was convicted of her murder and imprisoned, but he escaped.

After all this time, Bailey’s finally been captured. Believing in his son’s innocence, Bailey’s father wants Kinsey to find Jean’s real killer. But most of the residents in this tight-knit community are convinced Bailey strangled Jean. So why are they so reluctant to answer Kinsey’s questions? If there’s one thing Kinsey’s got plenty of it’s persistence. And that’s exactly what it’s going to take to crack the lid on this case.

As Kinsey gets closer to solving Jean’s murder, the more dirty little secrets she uncovers in a town where everyone has something to hide—and a killer will kill again to keep the past buried...

This was such a weird Kinsey Millhone book. A lot of the ones so far have had a lot of action, some with her traveling around, and a lot more inner dialogue.

Here, we don’t really see her at home except in the beginning, and there isn’t much action until the end.

It was still very good – it was just different and it took some getting used to.

The one difficult thing about reading this book was that I had zero feelings for the family she was helping or even the people in the town she was in. I didn’t feel connected to them, and I didn’t really care about what happened to them. They were all just crazy.

It was great to read another Kinsey novel, but the supporting cast in this one didn’t do anything for me. In a very character-driven series, that fact made this one weaker for me.

I also guessed the twist before it was revealed

Memorable Quote: "Sometimes being fooled by love is worth the price. At least you know you’re alive and capable of feeling, even if all you end up with is chest pain." 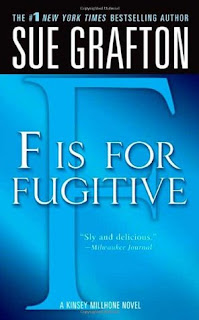