Two for the Dough by Janet Evanovich

Bounty hunter Stephanie Plum is still learning the ropes at her cousin Vinnie's bail bond office, so when she sets out on the trail of Kenny Mancuso--a suspiciously wealthy, working class Trenton boy who has just shot his best friend--the stakes are higher than ever. That Mancuso is distantly related to vice cop Joe Morelli--who is trying to beat Stephanie to the punch--only makes the hunt more thrilling….

Taking pointers from her bounty hunter pal, Ranger, and using her pistol-packing Grandma Mazur as a decoy, Stephanie is soon closing in on her mark. But Morelli and his libido are worthy foes. And a more sinister kind of enemy has made his first move…and his next move might be Stephanie's last.

Book #2 in the Stephanie Plum series, and I think I can say that I enjoyed it even more than the first novel. Many times the first book is all about introducing the main characters in the series, and it is all so new.
Well, with the second book, I had a better understanding of who the characters are and how they contribute to the series. That makes it easier to read and it makes it more enjoyable.
Stephanie is a great protagonist. She is witty, smart, and just helpless enough to get herself into hilarious situations. I was a little annoyed with this in the first book. But there was an improvement in that area in this book, and I think she is starting to understand her job better and become more independent. I think that will only continue as the series goes on.
Also, Grandma Mazur is hilarious. She was the character that initially drew me to the series when I read the first book years ago.

The storyline in this one was interesting as Morelli and Stephanie were trying to find and catch Morelli’s cousin. It added a bit of complexity to it as nothing is ever cut and dry with family.
It surprised me how dangerous he actually was.
One thing I didn’t understand was how Sandeman just about disappeared after initially threatening Stephanie. I thought he would stick around longer and be a menace.
Regardless, It was a fun and fast-paced story.
The only thing I have to get used to is the chapters in these books are a lot longer than the ones in the Kinsey Millhone series and in Patterson books. So, sometimes, it seems to drag on longer than those. I don’t see that as being as much of an issue as I get more used to it.
I am also interested in seeing how the relationship between Stephanie and Morelli grows.

Memorable Quotes: “I religiously went to the range to practice, but truth is I’m hopelessly unmechanical. I harbor an irrational fear of guns, and most of the time keep my little S&W empty of bullets so I won’t accidentally blast the toes off my foot.”

“I dressed in shorts and a sweatshirt and laced up my running shoes. I did this with the same amount of enthusiasm I could muster for self-immolation. I tried to run at least three times a week. It never occurred to me I might enjoy it. I ran to burn off the occasional bottle of beer, and because it was good to be able to outrun the bad guys.”

“I rumbled off to Vic’s Video and rented Ghostbusters, my all-time favorite inspirational movie. I picked up some microwave popcorn, a KitKat, and a bag of bite-sized Reese’s peanut butter cups, and a box of instant hot chocolate with marshmallows. Do I know how to have a good time, or what?”

“When in dread, my rule was always to procrastinate.” 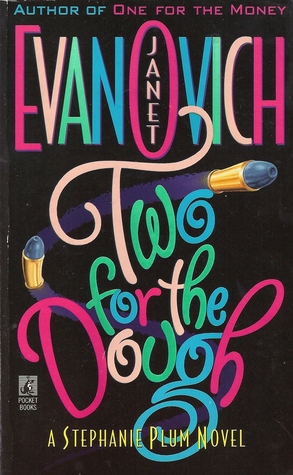