In a town where the corrupt are protected, a bereaved mother seeks retribution for an arsonist’s deadly crimes. Only Nameless can help ease the burden of her grief—and satisfy her rage—in part four of this thrilling series.

After a suspicious house fire, Regina Belmont lost her two children, was left disfigured, and was abandoned by her gutless husband. Brokenhearted and bullied into silence by corrupt officials, Regina’s only recourse for truth and justice is Nameless. There’s something about this case that’s breaking Nameless’s heart as well. But can he bear to remember why?

This is the second bad guy in the series who thinks he can play God. Well, the God of Fire . . . so, maybe the Devil. Either way, sometimes the most charming people can be the most heartless. But, Nameless and crew don’t buy into the act.

They know what he’s done, and now he has to pay. This one was also pretty creative in that they had to go after more than one guy, but Nameless only had to take out one himself.

Red Rain may have been the easiest novella in the series to read. Don’t get me wrong, this guy has done truly evil things that make you angry. But, it’s not as sickly disturbing as some of the others.

Memorable Quotes: “’Justice is a human concept, as flawed as any. There is no reliable justice in this world and, given human nature, never can be. Politics, bigotry, envy, ignorance . . . Those forces and others redefine justice day by day, until it means something different to everyone—until it means nothing at all.’”

“’There’s hope, though not in justice. There’s hope in truth. A sea of lies can’t wash away a single grain of truth. Truth is what it is.’”

“To be fair to himself, perhaps he should accept that some fates are sewn into the fabric of time with tighter stitches than others. The possibility exists that no one, even if possessing greater powers than his, can strip the future of all hardships, threats, and tragedies. Utopias, after all, are sought mostly by great fools, though also by dangerous charlatans, and more death and pain has been brought down on humanity by the pursuit of a perfect world than by all other crime combined.”

“Humble goals and modest expectations are more likely to be fulfilled than are utopian dreams.”

“Truth. There is no one truth. Everyone has his own truth. It’s all about point of view.” 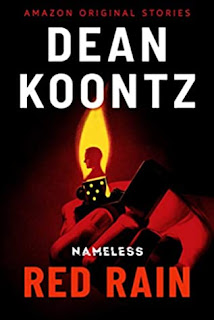