The Twisted Ones by T. Kingfisher

When a young woman clears out her deceased grandmother’s home in rural North Carolina, she finds long-hidden secrets about a strange colony of beings in the woods.

When Mouse’s dad asks her to clean out her dead grandmother's house, she says yes. After all, how bad could it be?

Answer: pretty bad. Grandma was a hoarder, and her house is stuffed with useless rubbish. That would be horrific enough, but there’s more—Mouse stumbles across her step-grandfather’s journal, which at first seems to be filled with nonsensical rants…until Mouse encounters some of the terrifying things he described for herself.

Alone in the woods with her dog, Mouse finds herself face to face with a series of impossible terrors—because sometimes the things that go bump in the night are real, and they’re looking for you. And if she doesn’t face them head on, she might not survive to tell the tale.

I picked up this book after reading a comment in a Facebook reading group about it being an actually scary horror/thriller. It takes a lot for books to freak me out or scare me, but I decided to give it a go.
My first impression was that the protagonist is very likable and adds some comedy to the density of the book with her personality.
There is also a dog as one of the main characters. So, A+.
Then, once I got to the first mention of the twisted ones saying, I had to close the book for the night. I’m not even sure why, but it creeped me out so much.
I was creeped out, but I was super intrigued. So, I picked it back up in the daylight and, after reading more, I didn’t have to put it back down in order to sleep. It definitely had a huge creep factor to it. But, I’d say it was more mysterious. I don’t know if I psyched myself out when I first started it or what, but the rest of the book didn’t scare me.
That said, I loved the journey that The Twisted Ones took me on. It was a fun read filled with mysterious and eccentric characters. It’ll make you laugh while simultaneously keeping you on the edge of your seat.
For that, I definitely have it on my recommended list.
I don’t know that we got a full explanation of what the large stones were all about, but it was enough of an explanation to not have me feeling like I needed more. I think it’s meant to be mysterious and weird, and it shall remain that way.
5/5 Stars. This is a fun one. 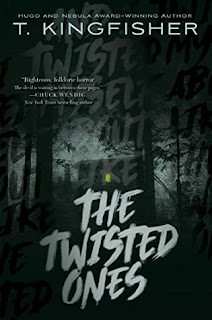