The Mercy of Snakes (Nameless #5) by Dean Koontz

A series of suspicious deaths in a retirement home draws Nameless into the confidence of a terrified former resident—and into the dark heart of a shocking conspiracy. In part five of the Nameless series, it’s time to hunt.

Oakshore Park is Michigan’s most exclusive assisted-living community. Presided over by two killer angels of mercy, it’s also the go-to facility in assisted dying. For a cut, they make impatient heirs happy. Nameless must concoct a scheme just as cunning. But righteous retribution stirs disquiet in the avenger as light starts to shine on the black hole of his past. Should he welcome it or keep running?

This was the weakest novella in the Nameless series. Maybe there were too many moving parts, a lack of chapters involving Nameless, or maybe I’ve listened to too many true crime stories about “Angels of Mercy”. Either way, it was just bland to me.

That isn’t really the vibe I was hoping for going into the final novella in the series. I was definitely left hoping #6 redeems The Mercy of Snakes and ends the series strong.

Memorable Quote: “In a world sick with envy that leads to coveting that leads to greed that too often results in violence, it wouldn’t seem that something as small as excellent muffins could lift a man’s spirits, even during talk of murder. But that is the way of the world: sadness and delight, anger and forbearance, hatred and love—all woven together in every inch of the tapestry.” 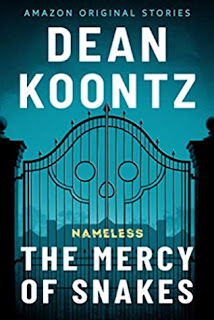