A MERCILESS KILLER ON THE HUNT ... AN INNOCENT CHILD IN HIS SIGHTS ... A WOMAN DRIVEN TO THE EDGE TO STOP HIM

The killer knows Eve Duncan all too well. He knows the pain she feels for her murdered daughter, Bonnie, whose body has never been found. He knows that as one of the nation's top forensic sculptors she'll insist on identifying the nine skeletons unearthed on a bluff near Georgia's Talladega Falls. He knows she won't be able to resist the temptation of believing that one of those skeletons might be her daughter's. But that is only the beginning of the killer's sadistic game. He wants Eve one on one, and he'll use his ace in the hole to make sure she complies. And he won't stop playing until he claims the prize he wants most: Eve's life.

The Eve Duncan series is one that I am recently a fan of. I’m only on book 2, but I want to see where the series takes her character.

In The Killing Game, Eve comes into contact with a man who claims to have actually been the one to murder her daughter. This throws Eve into an emotional rollercoaster because as far as she, and everyone else, knows – the man who killed her daughter was executed. Could he have been lying?

This new man taunting Eve goes by the name Dom and he decides to put a new weight on Eve’s shoulders. She must keep another little girl safe while trying to deal with the supposed news about her daughter’s killer.

It’s a wild ride. I thought I had it all figured out, but I definitely didn’t. I playing right into Johansen’s trap and assumed Dom was who she wanted us to believe it was.

The one thing I did know – I absolutely HATED Dom. This book was way too long in my opinion, but only because I absolutely could not stand this evil, evil man. I needed to see him taken down a lot quicker. Every time he popped up, I just wanted to whip my book at the wall. But, I continued on.

I’m glad I did. Because we meet a dog and he becomes a crucial piece of the story. Good boy, Monty.

There was one other thing that bothered me and that was the personality change in Joe. He became so…. Entitled to Eve’s affection and it all just felt so gross and manipulative. I just felt grimy reading it. I hope it was a one off and he’s better in the next one because I don’t know how much longer I’ll be able to last in this series if he remains manipulative. I’d hate to stop, because Eve is intriguing. 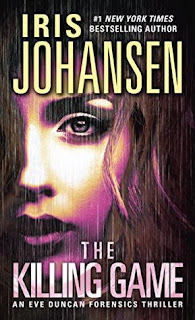